The Willamette River is known for being one of Oregon’s best spring chinook fishing destinations, with plenty of hatchery run salmon allowing anglers the ability to bring home some of the best-eating fish there is. When you fish the Willamette, the fishing starts in the Lower Willamette during the late winter as springers begin their journey to the Clackamas and the Willamette Valley through spring and into early summer.

The lower Willamette is generally open all year for daily harvest of two fin-clipped chinook salmon (fin-clipped steelhead you may catch are counted in the same daily limit). Also as of 2014, anglers need a special endorsement in addition to angling license and harvest tag to fish for salmon, steelhead, and sturgeon throughout the Columbia River basin. However, anglers should always check the Oregon Department of Fish and Wildlife website for restrictions sometimes imposed after the printing of the Oregon Sports Fishing Regulations book.

If you end up farther upriver, consult your regulations booklet as well for information about closer areas below the falls at Oregon City and the West Linn Paper Company tailrace.

Fishing slows for chinook when the Willamette gets too muddy, following heavy rains up in the valley.

Check the tide tables for Kelley Point before you go. (Use the River Levels link in the left margin on this site.) seasoned anglers who fish the Willamette often fish for springers here through the incoming tide, with the best bite often occurring from an hour before to an hour after a tide change.

Fishing at the Head of Multnomah Channel
A favorite fishing spot on the Willamette River is just below the St. Johns Bridge at the head of Multnomah Channel, this is where migrating springers tend to stack up on their journey to the promise land.  In this area, you’ll want to run your gear at depths of 18 to 25 feet. The fish tend to hag at the bottom through this area of the river so you should stick to an area about half mile above or half a mile below the channel, also slightly into the channel.

At times, the fish in the lower river will bite better in the deeper areas, such as the shipping lanes. At those times, it’s recommended to fish where the river bottom is 50 to 80 feet deep in areas upstream from the channel toward the St. Johns Bridge. You can also fish water almost that deep in the Willamette below the channel, towards the Columbia, especially on the Sauvie Island side where the bottom is often 40 to 60 feet deep. This area is also a popular area for Northwest sturgeon fishing guides to target catch and release sturgeon and on some occasions the state will open the area to keeper sturgeon fishing.

In both of these deeper areas, anglers generally have the most success fishing in mid-range depths, at 20 to 30 feet deep.

Best bait
The preferred bait for fishing the lower Willamette is and always will be herring. Cut plug is probably the most common but whole bait work as well.  Some anglers swear by cut plug and refuse to fish anything else, while others prefer whole baits, which are quicker to rig. On certain days salmon may prefer one over the other, a good way to determine which is best in the area of the Willamette your fishing, rig a couple of rods with both. This will allow you to gauge what the salmon want that day. Green label is the most popular herring size in the spring, although larger baits are fine for making cut-plugs.

The Willamette River also provides opportunities for catching bass, walleye and a variety of trout. There have also been some fairly large Channel catfish reported caught on the Willamette as well. 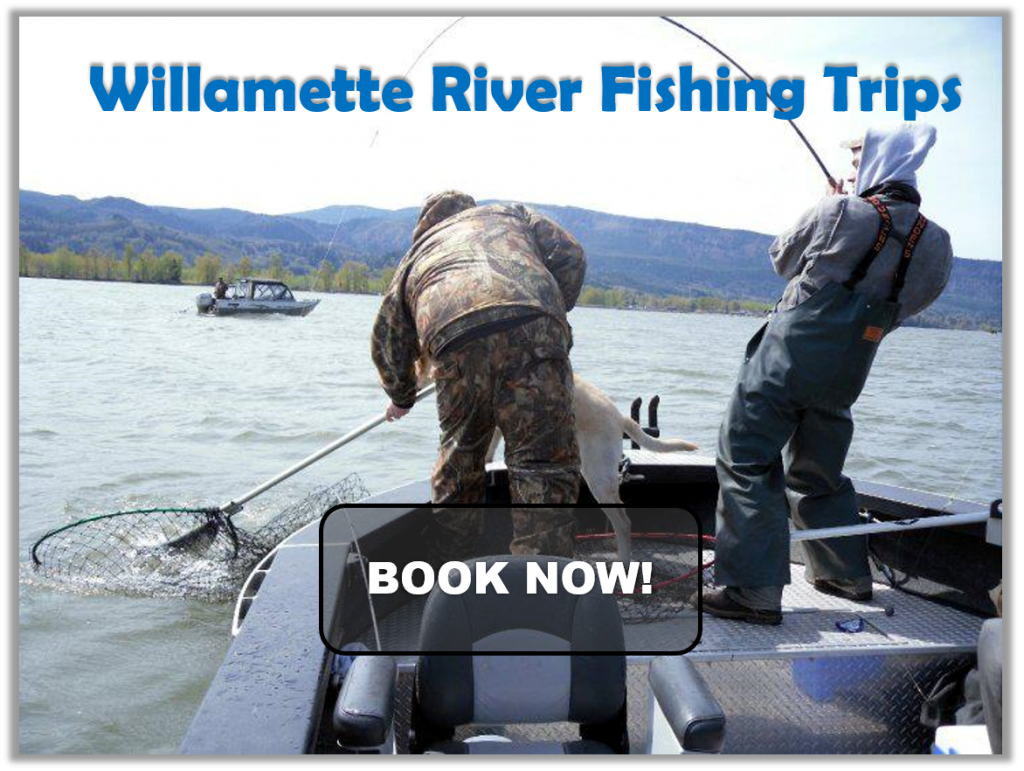